What are the challenges of writing a Dickensian novel for the 21st century?

Interesting question! I suppose I would say that there are challenges that I chose not to take up, and challenges I couldn’t avoid. The most obvious example of the first was my decision not to write like Dickens – not to even try to write like Dickens. The ‘conceit’ of the book I wrote before this one was to create a murder mystery in Jane Austen’s style, exacting mimicking her language and the cadence of her prose; with The Man in Black I decided very early on that any attempt to pastiche Dickens was doomed to descend to parody sooner or later, so I didn’t even attempt it.  I aimed instead to create a ‘Dickensian’ feel through the subject matter, and the settings, and the use of some of his characters, rather than by trying to make it sound as if he could have written it.

As for challenges I couldn’t avoid, if you’re trying to create a Dickensian atmosphere there’s no alternative to detailed research, but actually that was one of the most enjoyable parts of writing the book. All those crowded noisy streets – the sights, the sounds, and, let’s not mince matters, the smells…..

How do you account for Dickens’ enduring popularity? How big a part do TV dramatisations play in that?

I think much of his popularity stems from the fact that he’s just such a consummate storyteller and has such an extraordinarily visual imagination– he creates characters and events that linger long in the mind. Though I do agree that the adaptations have played an enormous role – probably more than with any other comparable writer. There have been dozens of screen versions of Austen and Hardy and the Brontës and the rest, but I think Dickens translates particularly well to the screen. I really enjoyed the BBC4 programme Dickens on Film that was aired in January, which included the Russian film-maker Sergei Eisenstein’s famous contention that Dickens unknowingly invented cinematic ‘montage’, because of the way he constructs his narratives, and uses a sequence of contrasting scenes to create tension, and evoke emotion.  Fascinating.

Your picture of Victorian London is even more brutal and remorseless than Dickens’. Was he too soft on the capital?

No-one knew the grim reality of Victorian London better than Dickens. He walked its streets by night, went into the thieves’ dens with the police on patrol, and helped to manage a home for so-called fallen women. The problem was that it was impossible to put the full extent of London’s filth, disease, poverty and crime into his novels – the conventions of Victorian publication simply wouldn’t stand it. But of course we have no such self-censorship, and no such qualms, so I can ‘stand alongside Dickens’, and write about what he saw, but couldn’t say. 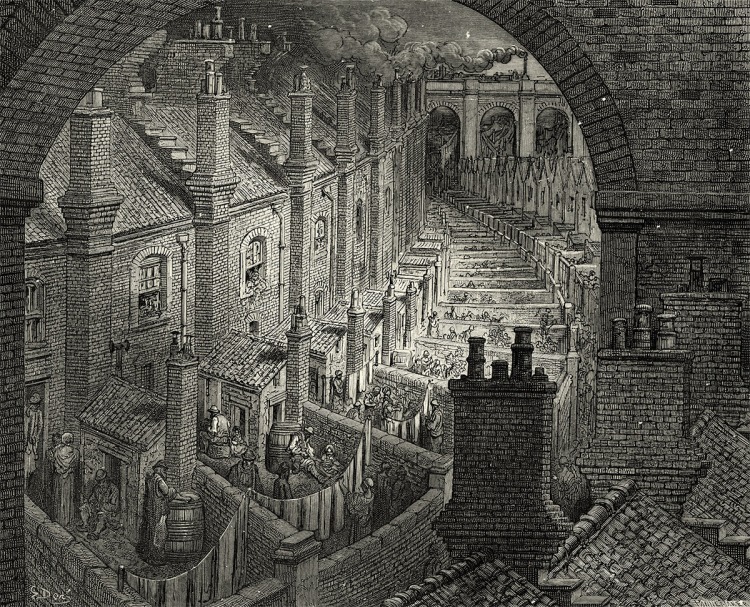 Do you think violence and depravity stalked London even more in Dickens’ day than in ours, or is the present-day violence – despite the coverage it receives in the press – just less visible to most people?

A bit of both. Some types of crime were no doubt just as prevalent in the 19th century as they are now, but it was simply not possible to talk about them – particularly ‘middle-class crime’, such as domestic violence committed behind closed doors. We’re much more aware of issues like that than Dickens’ contemporaries were. On the other hand there were levels of destitution-driven depravity then that would shock and sicken us now, like the widespread prostitution of children, often by their own families, and the frequency with which poorer women ‘disposed of’ their own babies because they simply couldn’t afford to feed them – a crime that’s only too horribly brought home to us in the very first pages of The Man in Black.

Some of Dickens’ characters fared worse under your pen than did their Bleak House counterparts, especially Esther/Hester. Do you think Dickens’ Esther was deluded, or were you trying to mix in some spice with the saccharine?

Bleak House is famously constructed as a ‘double narrative’, with part of the story told in the present tense by a third-person narrator, and part related by Esther, as the story of her own past. I’ve deliberately echoed this in the structure of The Man in Black, with the account of my young detective Charles Maddox’s investigations interweaved with a separate narrative written by a girl called ‘Hester’. She’s definitely not the Esther of Bleak House, but I chose a very similar name because I wanted her story to be, in part, a commentary on Esther’s.  Esther is presented to us in Bleak House as a reliable narrator, but in fact she can be very disingenuous at times, and her story raises questions and issues which can make the modern reader quite uneasy. I wanted to explore that tension.

Did you decide at the outset which characters would fare better under your pen than in Bleak House or did the story develop its own twists and turns as it went along?

Some were just so marvellous that no writer in their right mind would change them – Tulkinghorn, Bucket, Trooper George. The challenge with them was to become Dickens’ ‘ventriloquist’ – to find a way of replicating the very distinctive way these people speak, which would bring them to life in my own story. As for the twists and turns of the plot, I’m one of those novelists who have a detailed synopsis before they start, so the Dickens-related aspects of the story were very clear to me before I started. The character who did change was Charles Maddox, my young detective, who is of course entirely mine. Every time I write about him I discover something new.

As well as Dickens, your book also shows the influence of John Fowles, Wilkie Collins and Henry Mayhew. What was it like trying to integrate these disparate sources?

One of the great joys of the book! Henry Mayhew is almost as important a ‘presiding genius’ of the book as Dickens. His London Labour and the London Poor was almost exactly contemporaneous with Bleak House, and is to Victorian non-fiction what Dickens’ novel is to fiction. His account of the real lives of the real people on London’s streets is so amazingly vivid you can almost imagine yourself walking alongside him.  And that’s exactly what I have Charles Maddox do, one memorable evening in a pub on the City Road…

As for John Fowles, I have always loved The French Lieutenant’s Woman, and The Man in Black doffs its cap to that great book, most obviously in the way I sometimes step out of the text and talk directly to my reader about things they and I know, but the characters cannot possibly understand. Like, for example, the real nature of the illness that afflicts Charles’ great-uncle and mentor, old Maddox, the former Regency thief taker.

The Soane Museum provides a fabulously sinister location and an apt metaphor for the machinations of its fictional creator, Tulkinghorn. How much do we know about the motives and aspirations of its real founder?

Dickens has Tulkinghorn living in Lincoln’s Inn Fields, but he never says exactly where, which meant I could choose to have him live in a house inspired by the one once owned by Sir John Soane, which is also in the same square. I’ve taken the odd architectural liberty in describing it, but as you say, there could hardly be a better model for the private residence of a man as powerful and mysterious as Tulkinghorn.  Soane’s house is one of my favourite museums in London – he was a celebrated architect and a passionate, almost obsessive collector, and he created the most extraordinary private gallery to display his artefacts. If you haven’t visited the museum I really do recommend it – and not just because you will then be able to visualise my two favourite scenes in The Man in Black!

The Man in Black is hugely ambitious, in which you have to inhabit – though not exclusively – another’s voice. It was preceded by a re-imagining of Jane Austen, The Mansfield Park Murder. Will your next novel tackle a different classic author or are you tempted to write in the contemporary voice of Lynn Shepherd?

I’m staying with ‘literary mystery’ with the third book, which will bring back the two Charles Maddoxes, senior and junior, for another 19th-century investigation. I’m not engaging with a specific text this time, but with real-life people. This has been fascinating to do, but much more demanding technically than working with another novel as your inspiration, where you have much more room to manoeuvre in terms of things like plot and time-scheme. After that, who knows? I never intended to write a series when I wrote The Mansfield Park Murder, but so many people asked me if I would write another story about the original Charles Maddox that I’ve ended up with three books. Something tells me I may stay with historical fiction, and I’ve always loved mysteries, so perhaps I won’t stray too far.

The narrator occasionally pops into the narrative to provide a 21st-century perspective. Why was it important to remind the reader that this, after all, is not actually a Dickens novel?

If you’re going to write about the 19th century now you basically have two choices – you can immerse yourself as narrator into the story, and bring none of your 21st century knowledge to bear; or you can step back and actively use that knowledge to provide a different perspective, as I do. As I said, I was partly inspired by the example of The French Lieutenant’s Woman, but I also felt it was important to put some distance between myself and Dickens, and I hope that’s a source of creative tension in the book. Above all, I wanted The Man in Black to ‘be its own book’, as well as a homage to Bleak House, and I worked very hard to ensure it works just as well if you’ve never read a single word of Dickens, as I hope it does if you’re a devotee.