“When I placed my head upon the pillow, I did not sleep…. My imagination, unbidden, possessed and guided me…. I saw – with shut eyes but acute mental vision – I saw the pale student of unhallowed arts kneeling beside the thing he had put together. I saw the hideous phantasm of a man stretched out, and then, on the working of some powerful engine, show signs of life, and stir with an uneasy, half vital motion. Frightful must it be; for supremely frightful would be the effect of any human endeavour to mock the stupendous mechanism of the Creator of the world. … On the morrow I announced that I had thought of a story….”

In her poem The Choice Mary Shelley talks of the “strange Star” that had been “ascendant at [her] birth”, in a reference to the comet that had then been seen in the skies. Whatever “influence on earth” that particular celestial phenomenon might have exercised, I doubt any novel was ever conceived under a stranger star than her own “hideous progeny”, Frankenstein. And how familiar the tale of this tale now is.

We are on the banks of Lake Geneva, in the summer of 1816. Wild storms have been raging about the Villa Diodati (shown below), and after a night telling ghost stories with Lord Byron, his doctor, and Percy Bysshe Shelley, the young poet who was soon to become her husband, the 18-year-old Mary Godwin has been disturbed by a chilling vision of a scientist destroyed by his own presumptuous ambition. It is a vision which will evolve eventually into Frankenstein, one of the most enduring novels of the 19th century, and the source of a terrifying modern myth. Mary’s account of its inception is so convincing that modern-day researchers have even attempted to date the precise hour of her vision by the appearance of the moon (between two and three in the morning of 16th June, according to one astronomer). 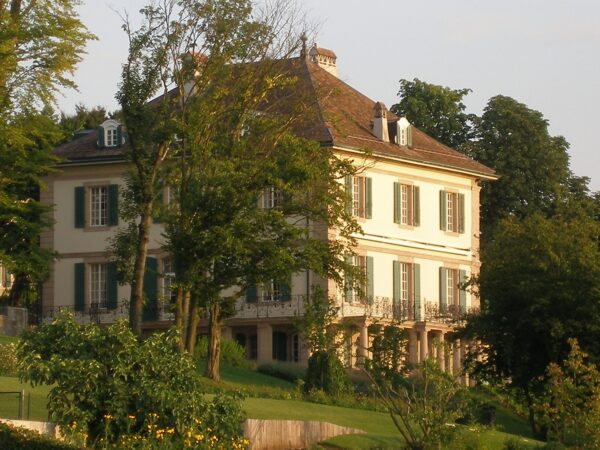 But is this really how the book came into being? The key point to remember here is that this account comes from a preface to the novel which was not added until 1831, some 15 years after the events described, by which time three of the four witnesses to Mary’s announcement were already dead – Byron of a fever in Greece, Shelley by drowning, and the doctor John William Polidori by his own hand. Who could have come forward to contradict her? Certainly not the one other person present that night: Mary’s step-sister Claire Clairmont, whose affair with Byron was at its height that summer. But what Mary couldn’t possibly have known was that Polidori kept his own account of those weeks at the Diodati – an account not published until 1911 – in which he makes no mention at all of Mary declaring to the company that she had “thought of a story”.

The ‘Frankenstein summer’ plays a central role in my own novel, and it is only one of many tantalising questions that still persist about Shelley’s book. Indeed, I have just raised one of the most intriguing of them in the very grammar of that last sentence. I called Frankenstein “Shelley’s book”, but which Shelley was it? Could a teenage girl, however well-educated, really have produced so powerful a story, especially when nothing she wrote in later life comes anywhere near it? And given that Percy Bysshe Shelley allowed his publisher to believe the book his own, and wrote a preface for it in 1818 which can scarcely be read any other way, surely he is by far the more credible candidate? You can certainly make the case for his authorship – and many people have.

Clearly we don’t know what early drafts of the book might have since been lost, but the manuscript that survives shows extensive changes and additions in Percy Bysshe Shelley’s hand; nor does the fact that the rest of it is in Mary’s writing prove anything in itself, since it could easily have been a fair copy of an earlier version, or one written to his dictation. The changes we see in the Bodleian Library manuscript show Percy making not just substantial but substantive amendments, sharpening the style and themes of the book in a way that tallies with what we know of his own preoccupations, and even his own history. For example, the horrifying vision of the monster at the window after Elizabeth’s death seems to be an uncanny echo of an episode in Shelley’s own life, long before he met Mary, when he was the victim of an apparent assassination attempt in Wales, and saw his assailant at the window. (Yet another incident in Shelley’s life which is fraught with unanswered questions, and another inspiration for my own novel).

In her 1831 preface Mary insisted that “I certainly did not owe the suggestion of one incident, nor scarcely of one train of feeling, to my husband”, but one might well respond that surely she is protesting too much; in my own view the very least one can say is that Frankenstein was a creative collaboration. How far that extended – at what point ‘collaboration’ might have become ‘joint authorship’ – is a moot point, and one we are never likely to resolve barring the discovery of more documentary evidence. But what we do absolutely know, without question, is that Mary was not the sole and only author of this book.

The philosophical preoccupations of Frankenstein are certainly Shelleyan (and by that I mean him, not her). The novel’s subtitle is The Modern Prometheus, and Percy Bysshe Shelley later wrote a verse play Prometheus Unbound, taking the same mythical figure as his central character. The reference to Prometheus in Frankenstein evokes the theme of secret or forbidden knowledge which is picked up in the first pages of the framing narrative, where Walton’s desire to voyage to “lands never before imprinted by the foot of man” prefigures Frankenstein’s attempt to “unfold to the world the deepest mysteries of creation” and “pursue nature to her hiding-places”. The difference between them, of course, is that Walton seeks only to discover what is already there; Frankenstein, by deadly contrast, seeks to usurp the divine prerogative and fashion “a new species [which] would bless [him] as its creator”.

Frankenstein certainly generated one new species, a whole new genre of literature which we now call ‘science’ fiction, but the text itself is not much possessed by science. There is no attempt – not even much interest – in imagining how Frankenstein actually makes his monster. The novel concentrates instead on the moral and metaphysical consequences of such an act, and most particularly the responsibilities of the creator to the created, and the ties that bind them together which are “only dissoluble by the annihilation of one of [them]”. Indeed the plot is driven by Frankenstein’s attempt to escape, repudiate or destroy those ties, and the power and terror of the novel lies in the fact that the more he struggles to do so, the more inexorably he and his creature begin change places: the hideous monster becoming through the acquisition of language a “sensitive and rational animal”, while the honourable and gifted scientist degenerates into a “self-devoted” monster of egotism who either cannot or will not take responsibility for the murderous consequences of his own hubris. The irony here is incisive: Frankenstein rejects his creation as a “monstrous image… endued with the mockery of a soul”, but we perceive only too clearly that, like Adam fashioned in the image of God, this creature is indeed a “filthy type” of its creator, but one where the resemblance lies, in Spenser’s words, “not in outward shows, but inward thoughts“.

Creature and creator alike become at the last outcasts, wandering the frozen northern wastes, and the monster that once pursued Frankenstein becomes in its turn the pursued. It is impossible, for me at least, to ignore the parallels here with Percy Bysshe Shelley – Percy Bysshe Shelley who described himself as “an exile & a Pariah” and “an outcast from human society”; Percy Bysshe Shelley who was obsessed by the idea of pursuit from an early age, and whose poetry is pervaded by what his biographer Richard Holmes calls “ghostly following figures” and dark demonic antitypes of the self.

Frankenstein is not without its (many) defects, and it may be worth pointing out that Percy Bysshe Shelley’s own youthful attempts at fiction are without exception deplorable. In Frankenstein, the insert narrative of Felix and the ‘Arabian’ is over-long, slows the pace, and adds very little; much of the language is ponderous; and the characters of Elizabeth and Frankenstein’s father little more than ciphers. The monster’s ability to acquire language to such a pitch of eloquence strains belief, and the construction of the plot relies far too heavily on improbable coincidence (as the writer Scott Pack’s publisher’s letter to Mary Shelley wittily observes).

It is flawed, yes, but it is also forceful and unforgettable. Because there are images and ideas here that will stay with you forever. The frozen plains of ice where Frankenstein hunts down his monster and sees “the print of his huge step on the white plain”; the creature’s awakening on that dreary November night when it first opens its “dull yellow eye”; the monster’s painful coming to consciousness and self-consciousness, and the tale it tells of how its natural “ardour for virtue” and desire for love is corrupted by the treatment it receives, and its brutal rejection by the one man who ought to have “render[ed] him happy”. And last, and above all, the way the book captures and articulates for the very first time what has since become perhaps the ultimate terror of the modern age: the power over life itself.

As a book Frankenstein may falter, but as a myth it is magnificent.

This post was originally written for the Writers’ Choice series run by the late Norman Geras. It also appears on the Wordsworth Grasmere blog